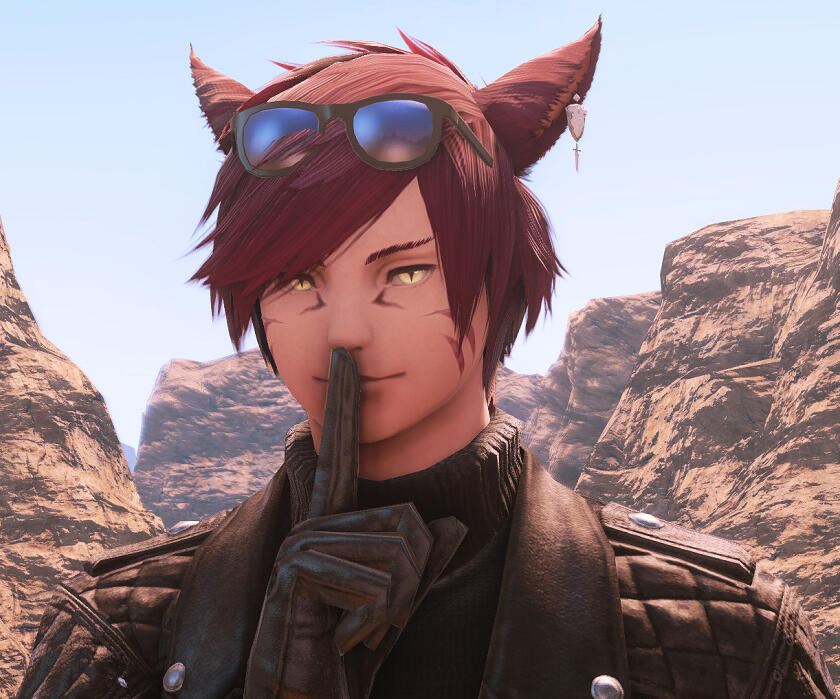 Whether he is considered cocky or confident, that depends on the attitude one starts with. An adventurer of many friends and admirers with a heart of gold, Luca is one who is always willing to meet and get to know any adventurer and see what comes next.

"It's easy to be ready for the cameras, well, atleast for me!" 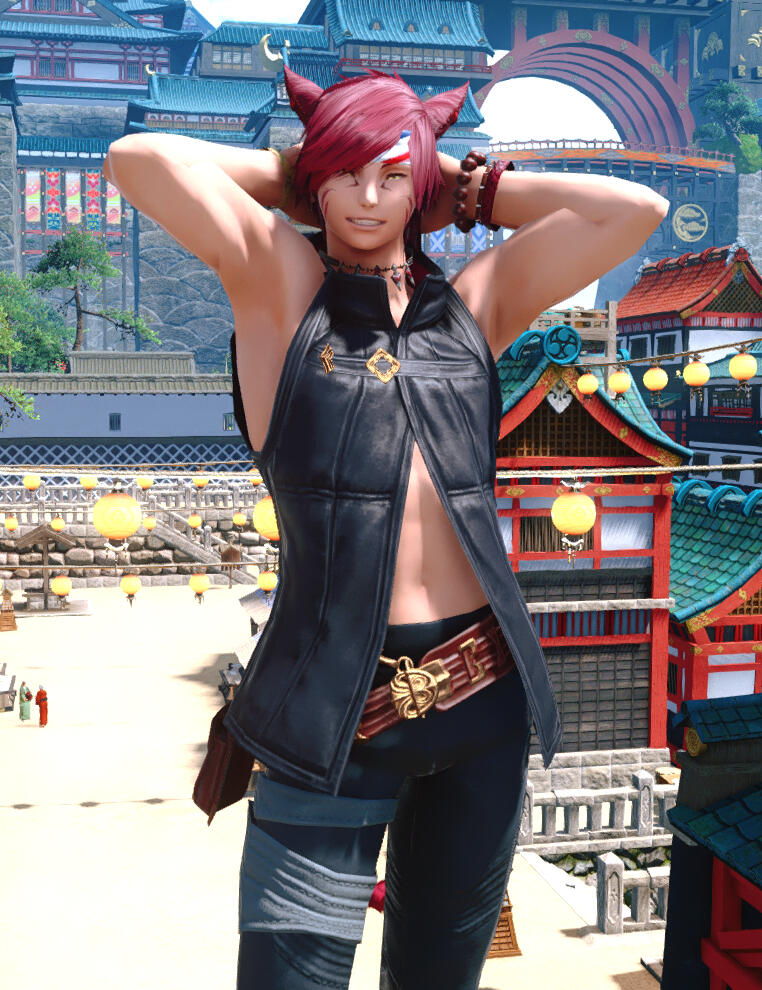 "Quite the curious one of me it seems! What do ye wanna know?" 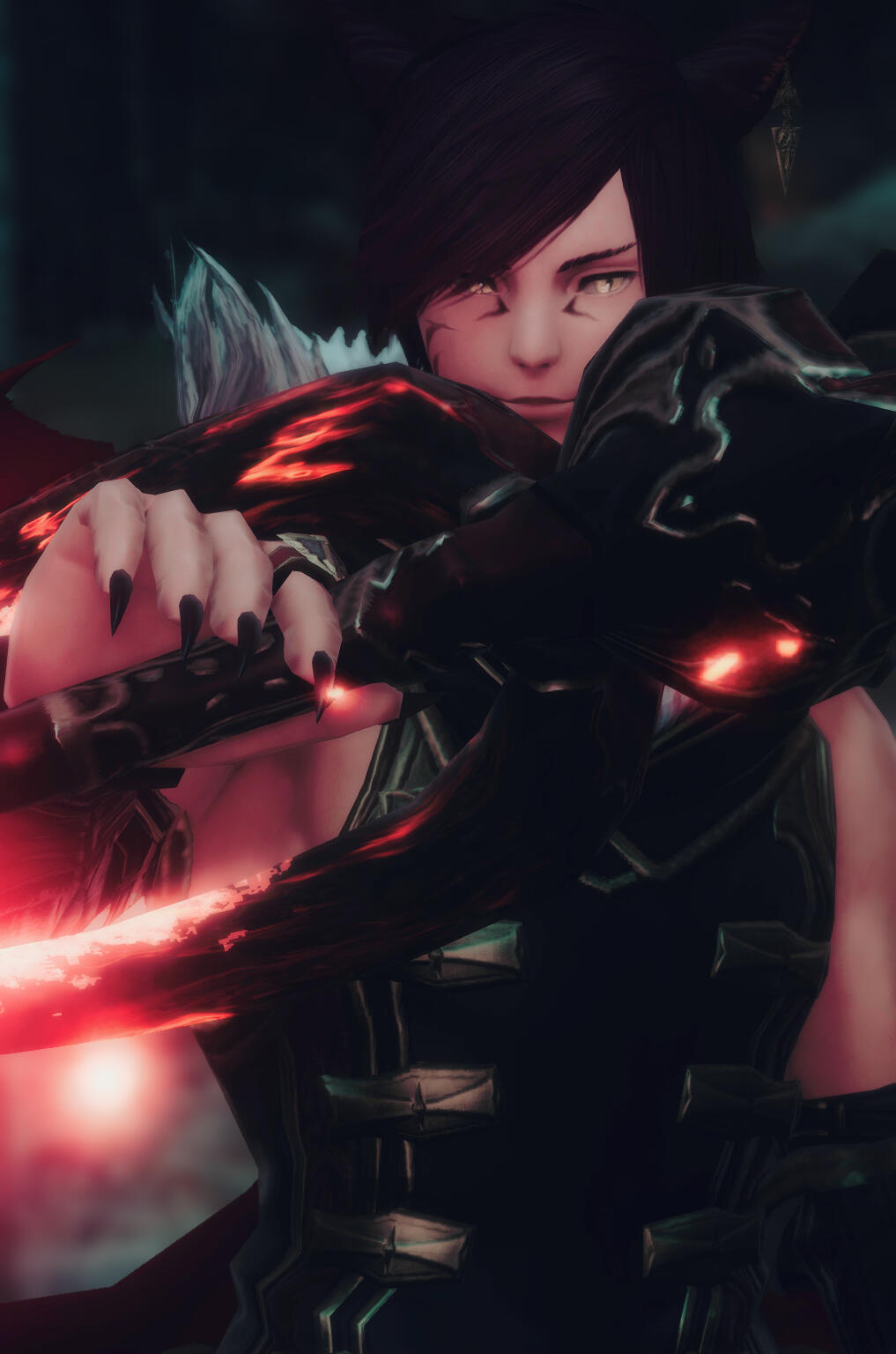 Education:
Luca was educated in Gridania in the magical arts of conjury, thaumaturgy, and the arcane, and can blend them together to be at its full potential. He has also dabbled in more conventional weapons such as knives, muskets, bows, lances, and swords along with a training in martial arts which he partook in Ul' Dah.

Prior to the Garlean Empire's ovetaking of Ala Mhigo, Luca's parents used to live within an ally tribe of Miqo'te that reside in the Peering Stones, consisting of sun seekers and patriarchal order. Luca’s mother, Malia, was a headstrong member of the tribe who was childhood friends of his father, Bramo, the most clever of the tribe. Bramo was a Tia, although being smart and tactical, his trials against the tribe Nunh proved difficult and he could not move up in the order. The tribe Nunh had a special affection towards Malia, poking fun at her that she was his favorite of the harem and that he wished to bear children with her alone, but she refused him, as she had an affection towards Bramo, although that attraction and possibility of relationship was looked down on as he was a tia. This fact led to the nunh threatening Malia out of house and home and exile from the tribe if she persisted with this forbidden love and did not meet the nunh's demands. Shocked and spiteful, Malia later met with Bramo, where the two schemed to break away from the tribe and to set up their own, with their projected future son to be made Nunh as they had no interest in leadership. They also hope that in doing so, a less strict system where every Miqo'te was an equal could be established for future generations. Having eloped and pregnant, Malia and Bramo lurked in the shadows away from peering eyes of the tribe, and were setting forth their plans of breakaway. When the Empire took stronger hold of Gyr Abania and brought the city-state of Ala Mhigo to its knees, they took the oppurtunity to flee Gyr Abania and and set forth to The Black Shroud. During their travels, Bramo and Malia met with moon keeper tribes within the shroud, where matriarchal hierarchy was in place, but also refused their practices and invitations to join, and instead sought out a village of other Miqo'te who followed the practices of other Eorzean's, a modernized society, with no distinctions between tias and nunhs and took up a democracy with mercantile work and trade being their focus. Their last name, Ademaro, was chosen out of spite of the nunh-tia distinction and their wishes of having a better life with these modernized Miqo'tes and other folk. At 5 summers old, Luca was told by Bramo and Malia that they were planning on making him nunh if they ever did establish their own tribe, which got to his head in terms of believing he is desirable and popular, though none have disagreed with that trait. When presented with the question of him braking away from the village to establish his own tribe, Luca was disinterested as the lack of partners of male and female presentation was not part of the role in a common patriarchal or matriarchal hierarchy. Although he is charismatic much like a nunh is thought to be, his smug, self-assured nature brings him trouble more often than not.

Luca grew up among these modernized Eorzean Miqo'tes who left behind their quotations in name, but still kept to the two syllable tonation as to not entirely leave behind tradition. His parents dropped the letter of their tribe abbreviation, so his tribal background is unknown. Though most traditions of the Miqo'te tribes were not practiced within the new village, some traditions still held, such as facial tattooing. Luca does not resent the tribal system of typical Miqo'te tribes, but does not agree with their practices as a whole and dismisses any offers to join one presented to him. Following the blessing of the Echo given to him to be an adventurer, he witnessed first hand what desperation from poverty and active oppression from the Empire caused, having lost many allies and realizing that's what his family went through as well before fleeing Gyr Abania. Luca swore to seek out the freedom and riches he craved by other means, as to finally bring peace to his homeland by freeing them from the grasp of the Empire and to also make a name for himself as a luminary.

He moved to Limsa Lominsa, where most of the tribes relocated and resided there since 19 summers old, to perform, take up odd jobs, and meet his goals of attaining wealth and fame, as well as finding adventurers to form an alliance with to help in his motive, much like the Robin Hood of his fellow seekers. Playing the piano and fiddle, dancing, bartending, hosting, serving, and acting in theatre shows, Luca lives a double life as he entices audiences and patrons when on call and fights against the rule of the Empire when off, confident in his skills both on and off the stage. Most certainly wearing a smirk, he'll greet any and all in his path, ally or enemy, and will display he is not one to underestimate or to take advantage of. 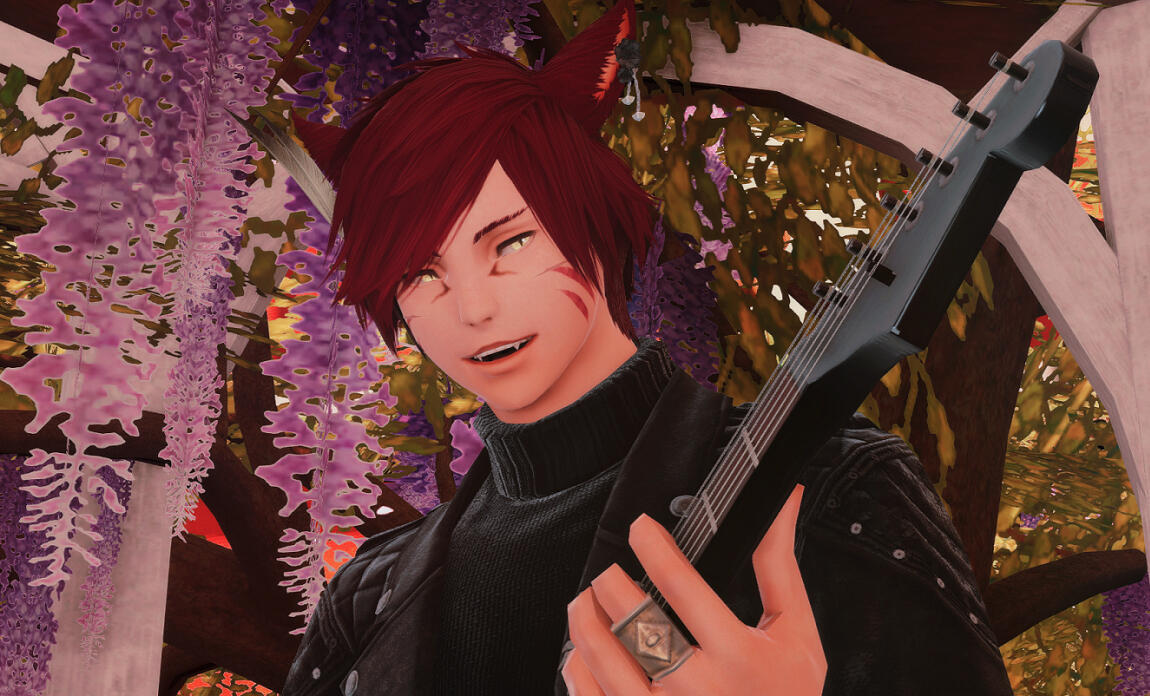 "My familiar and I have all the time in the world."

Luca (Loo-kuh) - Defined as "lux", fitting as he has a bright personality and shining gaze
Ademaro (Ah-deh-mah-roh)- Meaning "wealth and fame" was chosen by his parents in protest of tribal upbringing, and to split from their past, a craving by which most adventurers seek to achieve in the field and based on the developments of the tribes after empire control

Claw mark tattoos matching hair color, in pairs, on each cheek. Like most Miqo'tes, facial tattooing was a ritual conducted on those who upheld tradition with coming of age and speculation of uptaking escapades outside of mercantile, commonplace, and tribal work.
There are two scars on his face, one on each cheek, as though the wound inflicted missed cutting through the bridge of his nose, but was made purposefully to mock the tattoos on his face by an Empire soldier he attempted fighting near the Ceruleum Processing Plant while getting his education in conventional fighting in Thanalan.
A large scar is noticeable through close inspection on his right shoulder, related to his assistance in the resistance and liberation of Ala Mhigo.

One day in the 5th Astral Moon of his 12th summer, Luca went out practice archery and elemental magic near the mountains of Xelphatol where he came across an adolescent hoglet, laying in the brush weak and injured, as though it had been chased through the nearby woods. With a tan and white striped coat and pink snout, Luca took him into his jacket and searched the ground for signs of its mother nearby who may had been looking for it. Instead, he stumbled upon hunt bills nailed to trees calling for any boars and kin, whose meat and tusks were in demand and had reward to be sought. Sneaking away with lost hope of the mother, Luca took the piglet back to his home in Gridania and cared for it during his last three summers of magic study. One eve when practicing his casting, Luca accidentally hit the piglet, who ran between him and his initial target, with a transforming magic that did not show any obvious changes nor flared up in the time since, although it has kept the hog in its adolescent form despite the summers going forth. Whether or not the hoglet was also made immortal is unknown, and Luca has yet to ask Master Matoya or the Sennas to check its aether and confirm suspicion. The hoglet stuck to his side since, accompanying him on gathering and crafting deals along with his other lines of work, and can be spotted by his side when lounging around Limsa waiting for his calls.
Luca refers to the shaggy shoat as Tato (Tah-to), meaning "little fighter". Tato does not seem fond of being pet, especially by those he's unfamiliar of, but will answer to food and eat out of one's palm. 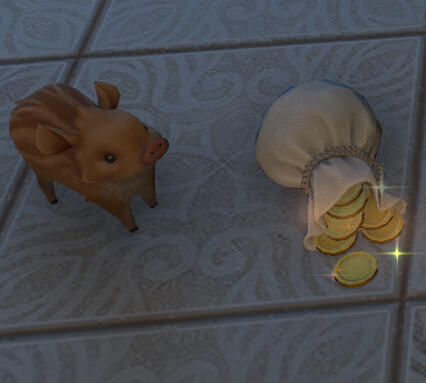 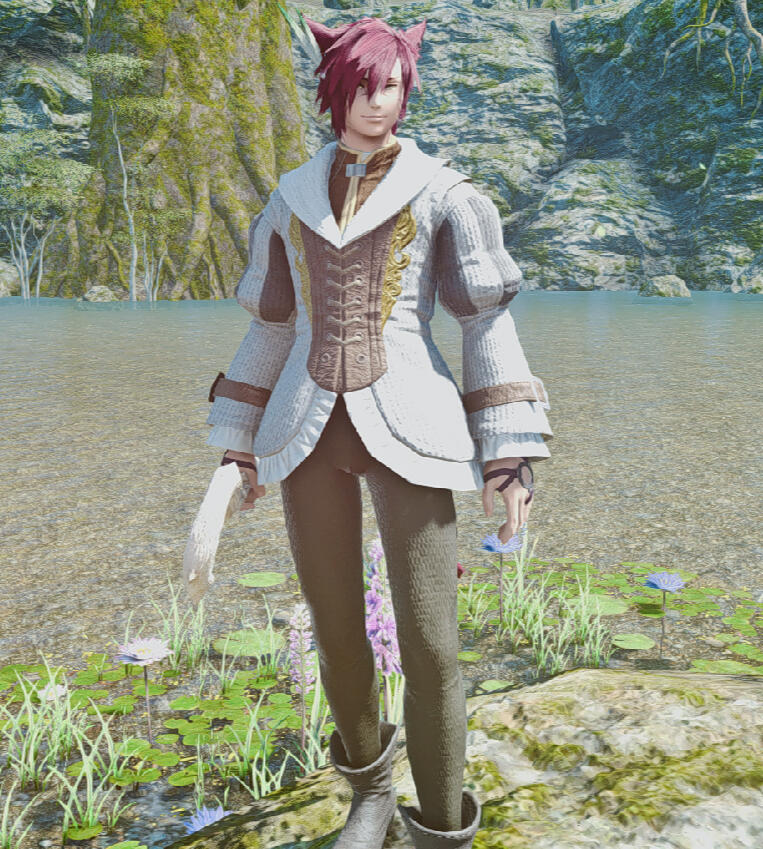 At 17, Luca had his start in the adventurer's guild after finishing his studies in conjury in Gridania where he later met the Scions of the Seventh Dawn. Through his trials with the Scions and development of the Echo, his involvement against the Garlean front deemed Luca as a Warrior of Light. 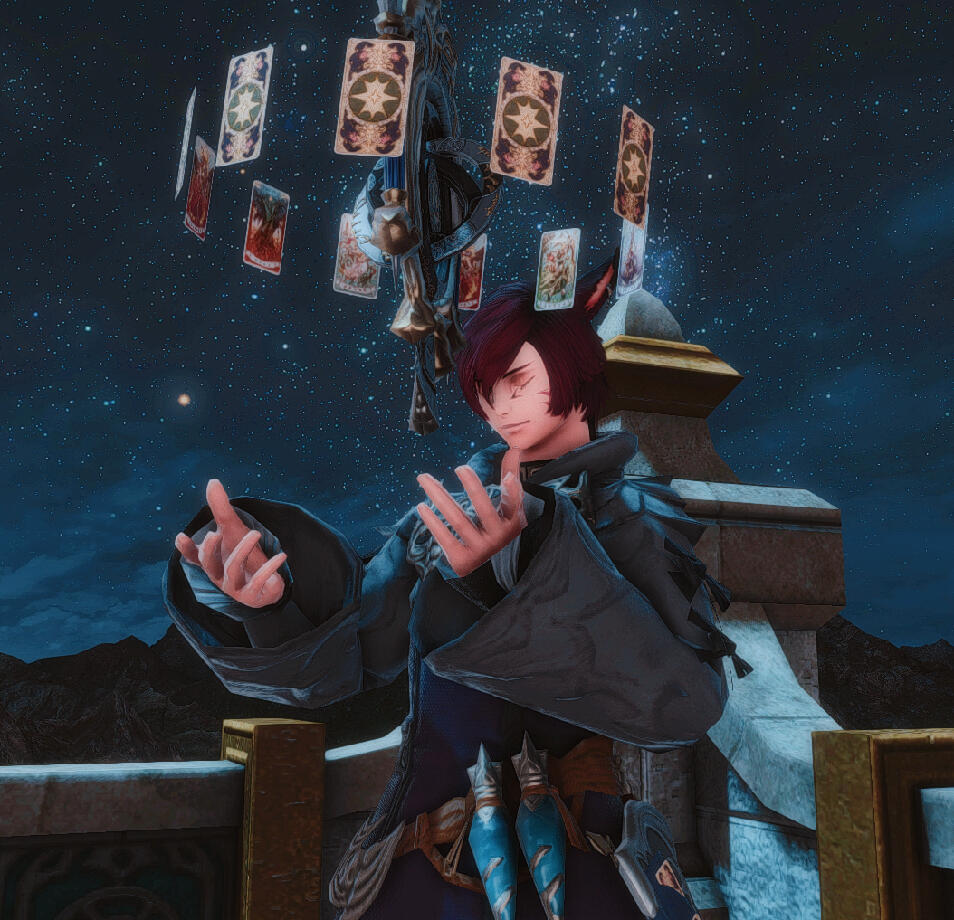 At 18, following exile from the major city states of Eorzea along with house and home, Luca headed for Ishgard where he along with the knights guard and allies put an end to King Thordan's reign and the Dragonsong War. Luca picked up his secondary healing practice, having partially studied arcana and star allignments, which he continued in Ishgard. 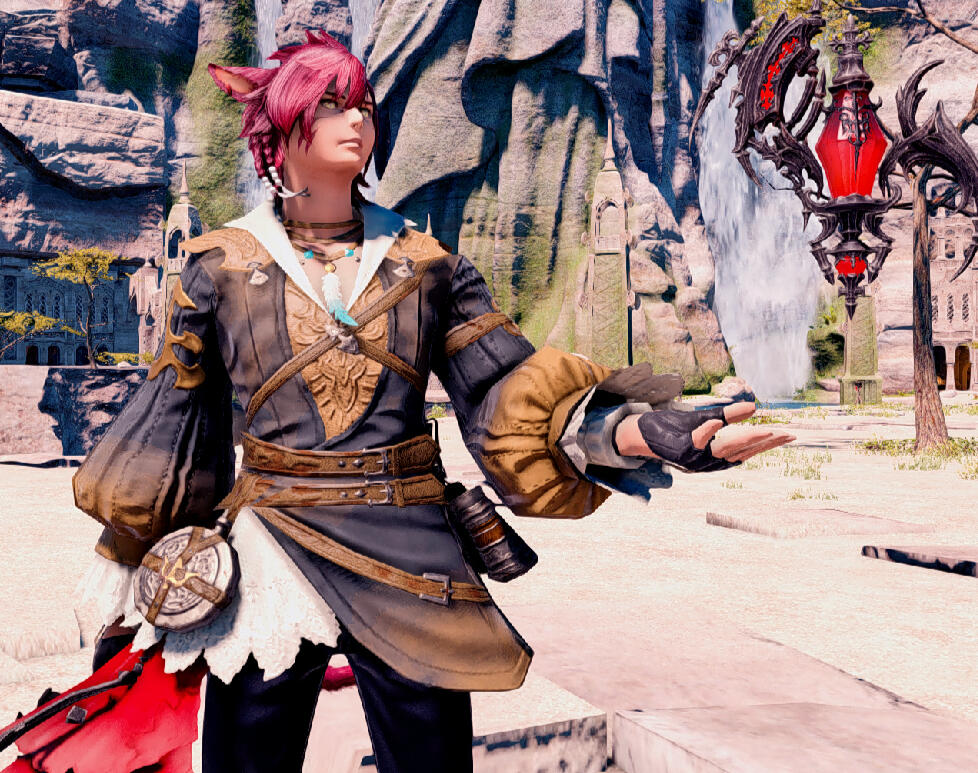 At 20, Luca returned to Gyr Abanaia to assist in the Ala Mhigan resistance, closer to home than he would've liked, and traveled across the sea to Hingashi to assist the Confederacy. His practice with the arcane arts strengthened tto where he was able to manipulate both white and black magic together for optimized performance, of which he didn't have as much of a focus for healing magic, but rather used it for damage. Shortly after liberation of both regions, he took time to travel to Ul' Dah and took up work there along with training in hand to hand combat. 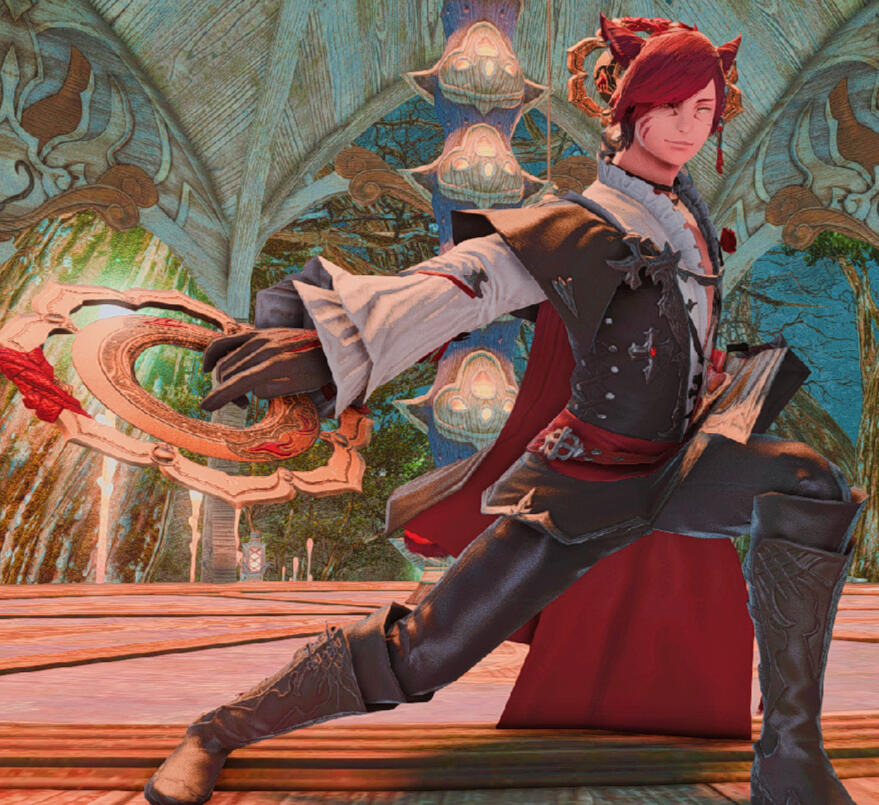 At 21, Luca was summoned by the exarch to the First, where sin eaters were rampant and Luca's ability to absorb the corruptive abundance of light within the world earned him the title the Warrior of Darkness. During his time in the First, he picked up the use of chakrams during his performances and learned how to utilize them as weapons from the Veera of the Rak'tika Greatwood. Freeing the First with the Scions and having made new allies and reuniting with those of old, Luca learned of the history of the unsundered and vowed to remember that they once lived. 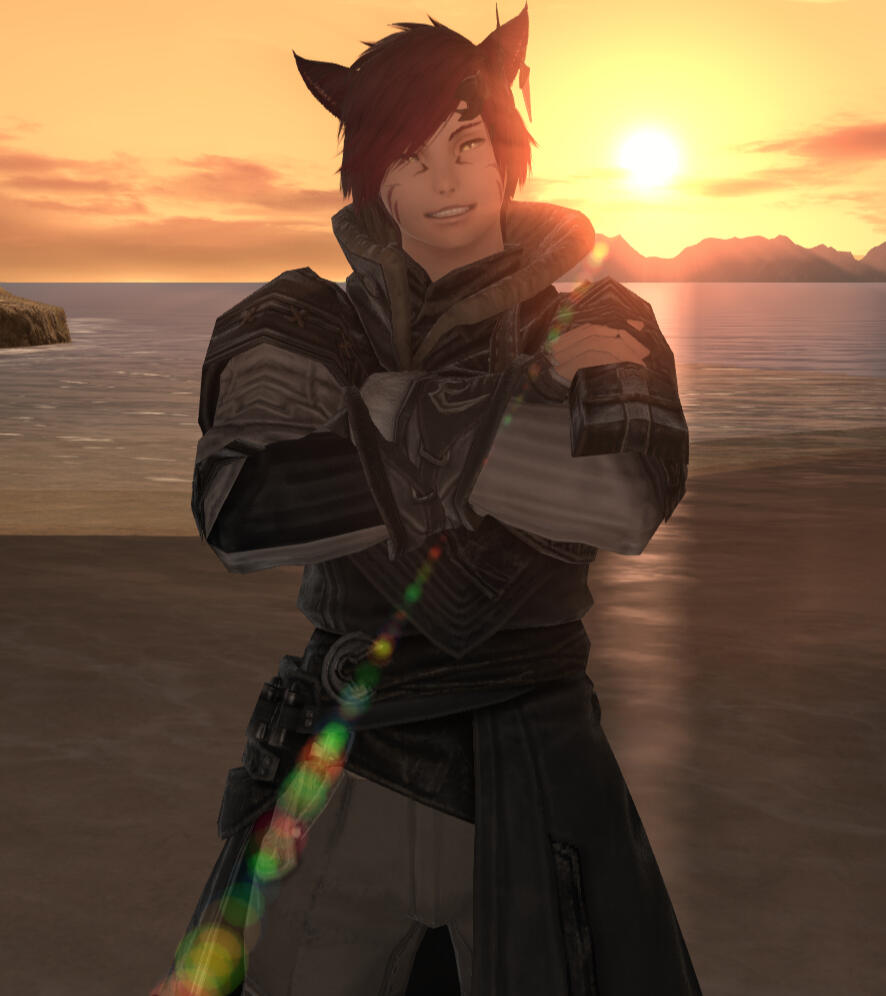 Since his return to the Source, Luca has been continuing his odd job exploits and taking up quests to make up lost time with an old friend, as well as maintaining social links with the natives of Limsa and his partner. Luca has also been seen lending his assistance against the Garleans in Bozja. His practice in the arcane met new strengths, along with his willingness for more physical practices, which he specializes for in fights alongside his allies.